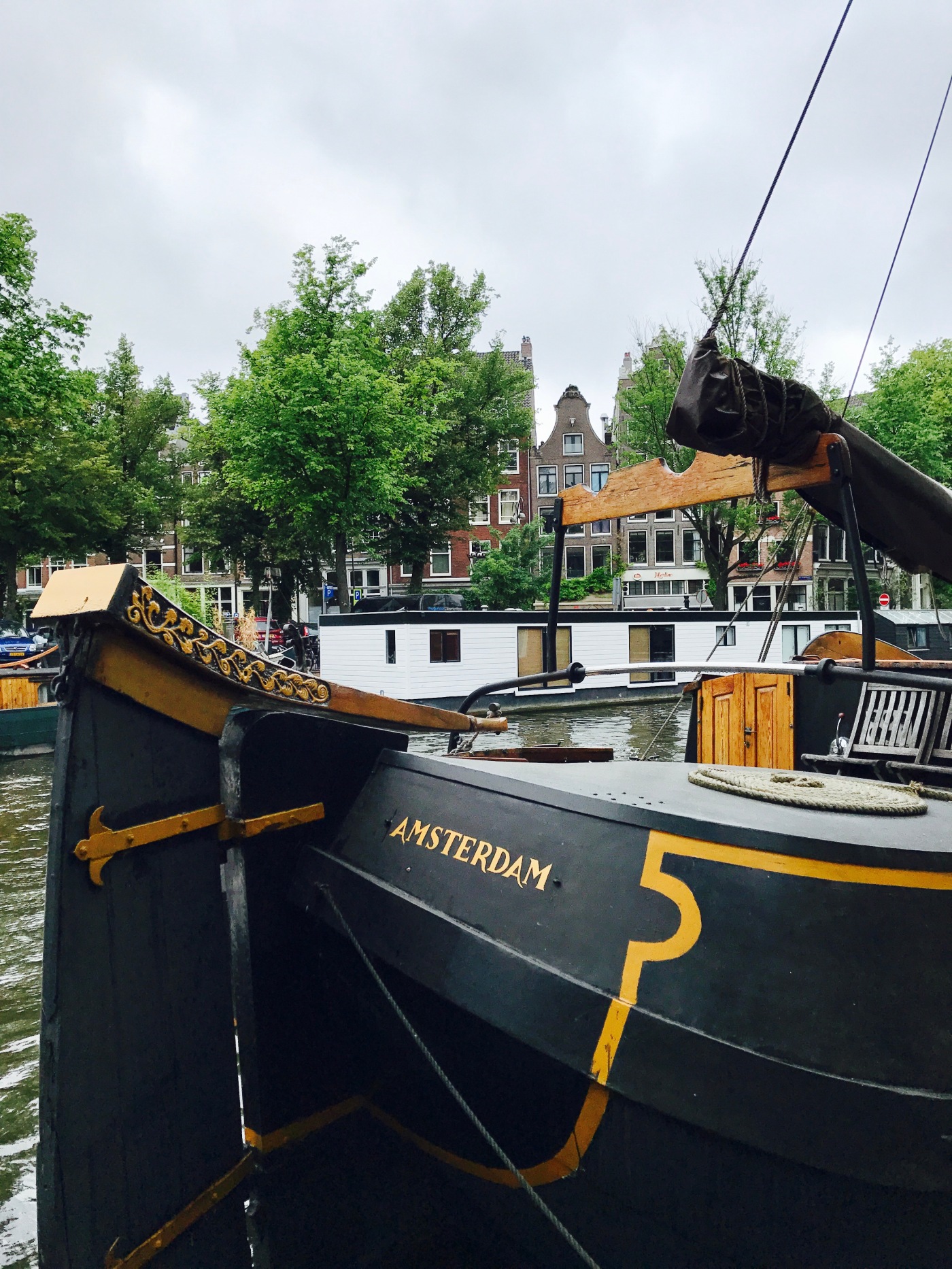 The hotel room has great big windows that offer wonderful views of Amsterdam. They allow the sun to shine in as soon as it rises, as a result I’m naturally waking up earlier than usual which I love because it allows me to begin my day earlier. Getting out of bed my body was sore from the little bike incident the day before. I’m a little scraped and bruised but 100% ok.

For the first time on my trip the weather was not favorable. It was cloudy, windy and rainy. I sat in the window and peered out to the IJ River to watch the various ships pass by. It’s always peaceful just gazing out to watch life unfold. I’ve seen various ships and barges pass by, lovers kissing, dogs chasing their owners and groups doing yoga.

I don’t get to see rain very often from where I’m from so the rainy weather was mostly welcomed. After breakfast, with my umbrella propped open to avoid getting soggy, I walked the bike back to the shop it was rented from. It appeared that due to the rain the bike rentals were slow for the day. The return was rather simple, the shop keeper didn’t ask how the ride was and I didn’t tell. It made me wonder how many tourists fall off their bikes. I’m sure I’m not the only one. I made a the video below of the traffic exiting the ferry to give you an idea of what I was up against when I crashed. 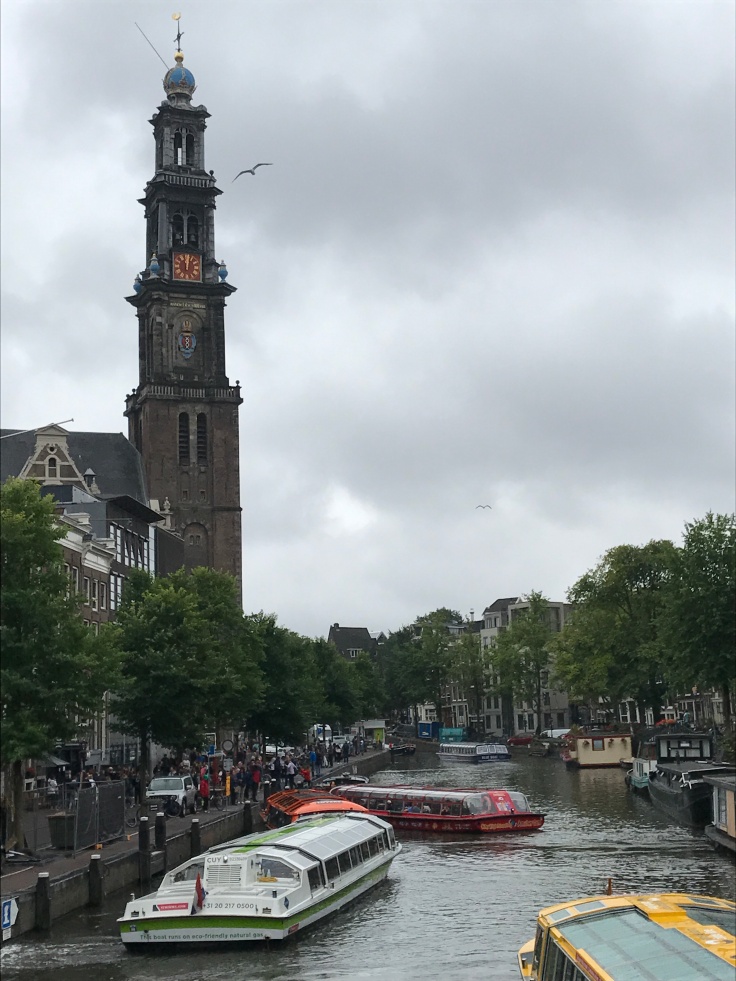 Considering the gloomy weather in Amsterdam and my desire to stay mostly dry I opted to see Amsterdam via a canal hop on/hop off boat tour. The tour had multiple canal stops around town allowing passengers to explore various areas of interest around town. The tour featured narration about various things like the canals, construction and history.

I learned that Amsterdam houses are built to lean forward to avoid damage to the structure when various objects are hoisted up into the homes by the pulley attached at the top of the front of each home.

I stopped by the Rijksmuseum again to sit on a park bench and enjoy a freshly made stroopwafle. Stroopwafles, a Dutch specialty are two thin warm crispy waffles filled with caramel. I gazed at the outdoor art installations and people watched as I enjoyed my treat. “I love Amsterdam” I thought to myself. 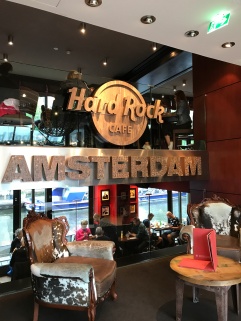 On my way back through the Rijksmuseum tunnel I passed through the gardens and watched some amazing musicians play Pachelbel’s Canon in D major.

I had lunch and a drink at the Hard Rock Cafe Amsterdam then took the canal to the stop at the flower market. The fragrance of fresh flowers permeated the air before I even I arrived. Various flowers were offered for sale but the abundance of flowers were tulip bulbs in every color imaginable.

I continued my stroll through the neighboring areas and as I got closer to where the popular coffee shops are located, I noticed various snack shops everywhere. From doughnuts and french fries to pizza and steak, every snack you were in the mood for could be found in Amsterdam. Many of those strolling the area wore sunglasses with a snack in hand. I’m sure they were each having a good time. 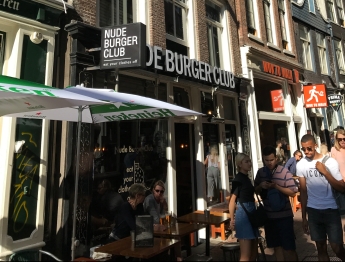 Evening had fallen upon Amsterdam again far too early. The sun was still out and it didn’t feel like 6 o’clock pm. I was determined to not have dinner at the hotel again. My plan was to have a little rest then head back out for a night on the town fully energized. I stopped by the market to purchase some drinks to have back at the hotel. I wanted to avoid any excited decisions to pop open 27€ mini bottles of Proseco from the hotel mini bar like I did the first night upon arriving.

Before getting into yet another over-the-top hotel elevator, I stopped by the hotel vinyl selection and took more records up with me. I put on music and some comfy clothes to relax. I sat at my favorite window with my drink. As the music played I relaxed more and more. Before I knew it I was too relaxed to venture back out.

Join 210 other subscribers
Follow The Girl With A Quirky Side on WordPress.com

I am indeed a girl with a quirky side and whole bunch of other things too. When I find something I like I become passionate about it. I like to travel, dream, hike and dance when no one is looking. Well almost no one because there was that one Christmas Eve when...

Join 210 other subscribers
Follow The Girl With A Quirky Side on WordPress.com